In the last newsletter of 2021, we took a look at the key indicators of gaming industry growth. Today, thanks to the annual report by Stream Hatchet, we can take a closer look into the streaming side of gaming. In other news:

In 2020, the streaming industry shot into the stratosphere. With pandemic lockdowns looming over the world, people turned to streams to find community, entertainment and pure fun. After seeing the 80% growth in watch time from 2020, even the biggest optimists assumed that next year will be a year for the industry to cool down and return to regular numbers. This did not happen.

An annual report released recently by Stream Hatchet shows that streaming is booming beyond any expectations. Although the growth is not as jaw-dropping as last year, it still is impressive with an increase of over 20% in watch time hours year over year. This means that the new streaming viewers found this new way of entertainment interesting enough to stick around.

So what does streaming of early 2022 look like? The key findings from the report present live streaming as entertainment that captivates the attention and engages viewers. As we found out in 2021, viewers watched 653 million hours of live streaming content each week across Twitch, YouTube and Facebook Gaming. The crown of the go-to platform is still in the hands of Amazon-owned Twitch, with 71% of the total hours watched across all three main services.

No less interesting is the overview of revenue distribution that creators bring to the table. As the report indicates, the top 1.2% of influencers generate 15.83% of the total estimated Twitch revenue. ‘Micro-influencers’ (with average viewership below 500 concurrent viewers) though accounting for 93% of the Twitch streamers, generate merely 56% of the revenue. This concentration indicates the hidden potential of streamers from lower size brackets.

Another matter worth noting is the increasing shifts in the kind of content the Twitch audience is interested in. Traditionally associated with gaming, the share of non-gaming content has increased, developing huge audiences. In 2021 all non-gaming categories accounted for 12% of the total Twitch hours watched, which is a 64% increase since 2020. Such a shift should be a clear indicator to non-endemic brands that the potential of streaming audiences is no longer reserved for gaming-related products.

A new peripheral allows creators to control their broadcasts with their feet.

Newly announced feature will allow players to fluently switch between PC and the new handheld console.

The show based on the cult game is about to air on the 23rd of March on the Paramount Plus platform.

New tokens will be emitted in the form of giftable non-fungible tokens (GFTs), combining lootbox and NFTmechanics.

After the troubled launch of the first gaming NFTs, VP of Ubisoft’s Strategic Innovations Lab, Nicolas Pouard thinks gamers do not understand the ramifications of owning in-game items.

Legendary Worms games series developer is getting into NFTs in collaboration with Reality Gaming Group. 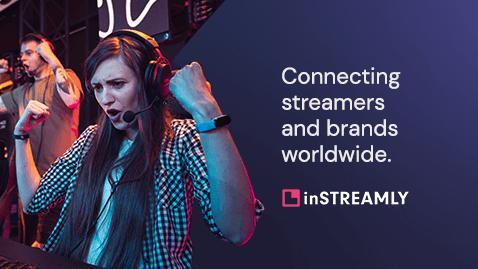 Want to be at the forefront of developing game-changing products in one of the fastest-growing industries in the world? Change the streaming economy with us!

Join us at one of the fastest-growing startups in the CEE region. At inSTERAMLY, we are dedicated to creating innovative solutions used by over 35,000 streamers all around the globe. We have connected creators with brands such as adidas, Disney, Netflix and Samsung.

In this fully remote position, you will be building, developing and implementing solutions that shake the foundations of the live streaming industry. 🔥

What's next for the top streamers?

Is streaming really on a decline?

The internet is overrun with headlines talking about the drop in hours watched in February across streaming platforms. Is it really that bad? The truth, as always, is somewhere in the middle.