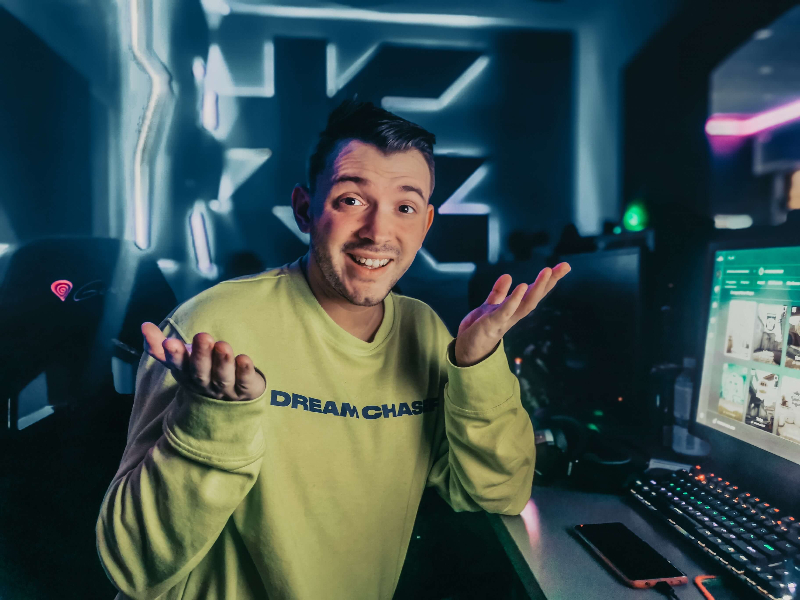 Choosing the right live streaming platform can make or break a streamer’s career. So, it’s not a decision that you should make lightly. While there aren’t many sites to choose from currently, they differ in crucial ways, such as monetisation, ease of use, and audience size. The main rivals in the video game streaming market right now are Twitch vs YouTube vs Facebook Gaming – check out our breakdown of their pros and cons to learn which one is the best for you!

When someone says “video game streaming”, your first thought may be Twitch. It’s easy to see why, since it represents 72.3% of the market share in terms of total hours watched, putting it far ahead of its competitors.

Twitch also manages to attract the biggest streaming audience – in April of 2021 it had 3,1 million average concurrent viewers. This means that you can potentially reach insane amounts of people. Twitch’s popularity doesn’t just come from the fact that it’s one of the first platforms of its kind, though. It’s also genuinely a very advanced and polished site. Its owners don’t get complacent and keep improving it further, frequently adding new features or tweaking current ones.

You can stream from your PC or laptop, console, or mobile device. The platform is easy to use, and even if you aren’t sure about something, there are probably at least a dozen tutorials and guides about that exact topic available.

There are many ways to earn money from streaming on Twitch, including Bits, subscriptions, direct donations, and ad revenue. Not to mention all the advanced features created to make streamers’ lives easier, such as channel rewards, Twitch Studio software, soundtrack by Twitch tool, and many more.

Nothing is perfect, so it comes as no surprise that Twitch has some flaws as well. While having the possibility to reach a wide audience is a good thing, it also means tight competition for viewers’ attention. Another thing that gets criticised is Twitch’s moderation style. Even very popular streamers are sometimes banned out of nowhere, without the possibility to appeal the site’s decision.

Facebook Gaming vs Twitch is not an easy dilemma to have. Facebook’s live streaming service hasn’t been around as long, so it’s less advanced in many ways, but it still manages to deliver some useful features, such as esports events integration. What’s more, as its name suggests, it’s very video game-focused.

Its relatively small audience is both a curse and a blessing. There are fewer potential viewers to reach, but there’s also less competition, which may make it easier to get noticed. If you have some cash to spare, there are many self-promotion options available.

One of the biggest cons of this platform is the clunky UI, which is in the same style as the main Facebook service and doesn’t have a video game aesthetic. So streaming on Facebook vs Twitch wouldn’t be so fun for gamers. What’s more, viewers can’t choose nicknames to be shown in chat – instead, first and last names from Facebook are shown. In some cases, this may lead to decreased engagement, as not everyone wants their comments to be linked to their real-life identity.

As for availability, Facebook game streaming has a dedicated mobile app, which is good news for mobile game streamers. On the flip side, console apps haven’t been released so far.

The platform’s monetisation options have been gradually expanded since launch and now include a virtual Bits-like currency (Stars), paid subscriptions, in-stream ads, and a built-in brand collab manager. To be able to monetise your stream, you have to meet the requirements of Facebook Gaming’s Level Up program.

YouTube is known best for its video hosting capabilities, but it also has a live streaming feature. It’s not aimed just at gamers, though, and functions as more of a general interest tool. Many content creators also use it to stream Q&As, cooking or just to chat with their audience.

It’s easiest to break out with your streams if you have already managed to gain some subscriptions through pre-made videos. Furthermore, setting everything up is very straightforward… but navigating the platform long term without running into copyright issues or getting demonetised can be difficult.

When someone wonders about choosing Twitch or YouTube gaming in terms of monetisation, you should be aware that YouTube is quite limited when it comes to earning money. Streamers can earn through Super Chat, and paid subscriptions have been introduced, but it’s best to also integrate your stream with a third-party website to collect donations directly.

Twitch vs YouTube is the most common discussion, however, Facebook gaming can’t be put aside.Out of the three that we broke down in this article, each live stream platform is free to use, but other than that, they differ greatly. Each has its pros and cons.

Twitch is loved by novices and pros alike, including the world’s most popular streamers. Even Ninja, who initially left it for Mixer, chose to go back after Microsoft decided to shut down its platform.

Due to the high number of streamers, it’s not easy to get eyes on your stream. Meanwhile, Facebook Gaming can be an especially interesting choice for beginners that are looking to break out and don’t want to deal with tight competition.

As for live streaming on YouTube, it may be particularly profitable for content creators that also upload premade videos and already have an established audience there. Keeping all of your content in the same place helps prevent audience fragmentation, since not all of your YouTube subscribers may be willing to follow you to Twitch or Facebook Gaming.

Choosing between streaming on Twitch vs YouTube vs Facebook Gaming isn’t so easy. The rivalry is great and there isn’t an obvious winner. While at first glance Twitch may seem like the right choice for everyone, in some cases other platforms may turn out to be a better fit. You have to think about what is most important to you (less competition, or maybe having more monetization options?) and make the decision yourself.

Remember That the Choice Is Yours!

It’s worth noting that you don’t actually have to choose just one streaming platform. Some streamers prefer to “restream”, which means broadcasting to multiple live streaming sites simultaneously and that’s okay too! Especially when they are free live streaming websites. 😉

Check out our handy guide to learn how to stream on Facebook, Twitch and YouTube at the same time!

Finally, if monetisation is an important aspect for you, don’t rely just on the streaming platforms, join inStreamlyand sign micro sponsorship deals with cool brands running creative campaigns with streamers.