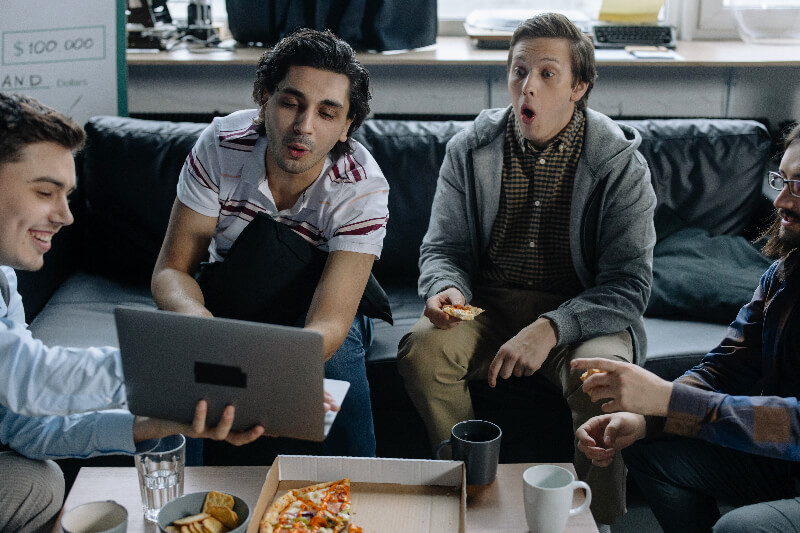 Do you think that gaming marketing is only for gaming brands? Think again! It’s no longer just the producers of sugar-rich fizzy drinks and triangular crispy snacks that want to promote their products and services through games. As the gaming industry itself becomes more diverse, so does the advertising within it. Let’s see how gaming advertising is not only for gaming companies but also for luxury, esports, food and beverage, technology, NGOs or any other sector that has Gen Z among their consumers.

Not only for gaming brands

The stereotypical image of gamers being exclusively young men interested mainly in fast food and electronics finally collapses – we are ready to admit that the demographics are much more mixed than anticipated.

The popularity of gaming rises with each passing year and accordingly, the industry as a whole becomes increasingly appealing to potential video game advertisers. At this point, it’s safe to say that gaming is an integral part of life for almost half of the worldwide population – and brands do not want to sleep on such an opportunity. Interested to see the most unexpected examples? We are happy to not only satisfy your curiosity. But also showcase how brands that are not native to gaming can thrive in this environment! The creativity of some of these examples is truly astonishing, so make yourself comfortable and get ready for a ride!

In 2019, five female characters from the famous Multiplayer Online Battle Arena game League of Legends have formed a hip-hop group called True Damage. Sounds otherworldly enough? That’s not even the best part. The costumes for two of the ladies have been designed by Nicolas Ghesquière. He is an artistic director of women’s collections from the legendary luxury brand Louis Vuitton. And they are available as special in-game skins (alternative looks) for the characters!

The collaboration between the MOBA giant and prestigious fashion house is not a one-time gig, either. The first skin, designed for the character Qiyana, has added splendour to the 2019 Worlds League of Legends Championship. The second, designed for the character Senna, arrived hand in hand with a capsule collection dedicated to fashionable (and wealthy) gamers. Riot Games, the studio behind League of Legends, refers to the collection as “the first-ever collaboration between a global eSport and a luxury fashion house”. And many predict there is yet more to come from it!

Advergames for the win: Gucci

Speaking of luxury fashion houses – there are surprisingly many of them taking interest in the gaming industry. Gucci, a dandy Italian fashion giant, has decided to enrich its existing mobile app with a vintage-style arcade section called – no surprise here – Gucci Arcade. 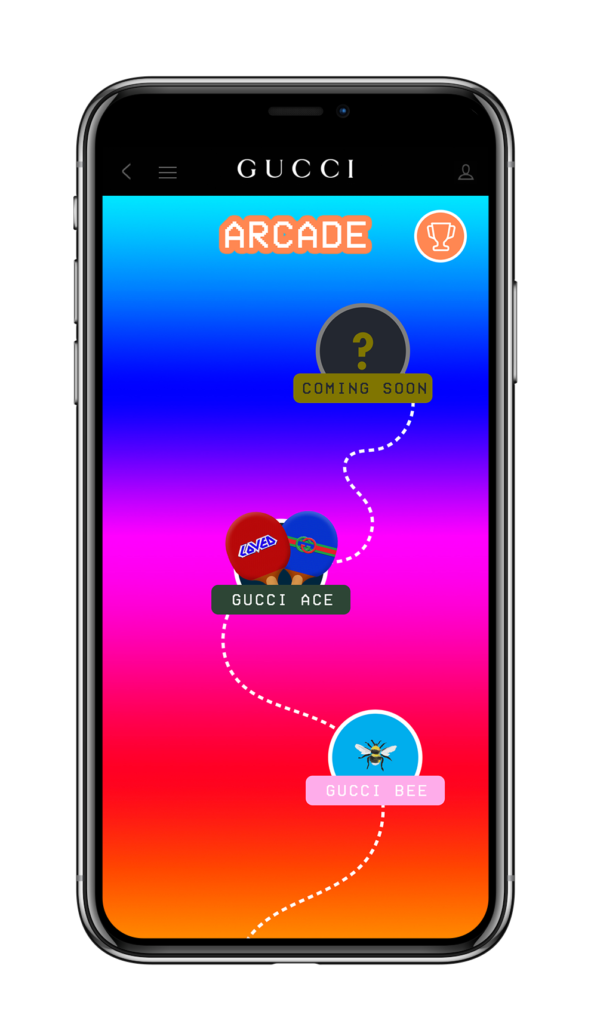 Most advergames (branded games developed to promote a product or a service) nowadays tend to be either hosted on company websites or distributed via social media platforms (especially the Chinese WeChat), but Gucci went against this trend. They chose to capitalise on a mobile gaming trend and get their existing and potential clients to download their app.  Their games (at the moment there are three different available, Gucci Lipps, Gucci Grip and Gucci Ace) are all heavily inspired by old-school 8-bit arcade games. This seems to be a winning move, seeing the huge comeback of aesthetics from the 80s and 90s. Gucci plays it both bold and safe, using a pre-existing channel (their app) but investing in a solution that is well known for being expensive and rather obsolete nowadays. Their GenZ fans seem to be loving it, though!

Although for many years associated mainly with traditional sports, adidas appears to strive to become a “gaming brand”. At the beginning of 2021, they had announced a collaboration with G2 Esports. One of the leading global esports and entertainment brands. And just a month later they started a marketing campaign promoting their ZX 2K Boost shoes that targeted streamers specifically. They sent gaming influencers the aforementioned shoe model and organised a challenge. In it, streamers were supposed to play Fortnite with special controllers used by feet.

inSTREAMLY had the pleasure to work on this campaign with the VMLY&R agency, boosting the reach and engagement on the broadcasted videos. Thanks to the highly entertaining idea on adidas’ part, great content delivered by streamers and the complex, multi-element campaign run by us and VMLY&R agency, the collaboration of sports shoes and gaming turned out really well! You can check out a more detailed case study of this campaign on our website.

Engaging gamers for a good cause: The Sarigato Foundation

Although a fascinating playground for brands, the gaming industry is also a chance for charities and non-profit organisations to reach more people. inSTREAMLY has decided to support The Sarigato Foundation and its initiative ‘Karmimy Psiaki’ (Feed the Dogs). This activation helped homeless cats and dogs living in polish shelters. Together we engaged streamers from the entire country in a very effective campaign. It was based on the ‘donation’ formula paired with interactive content appearing during the broadcast. Working with The Sarigato Foundation we created adorable animations depicting cats and dogs that addressed the viewers with feeding requests full of gaming slang and inside jokes. 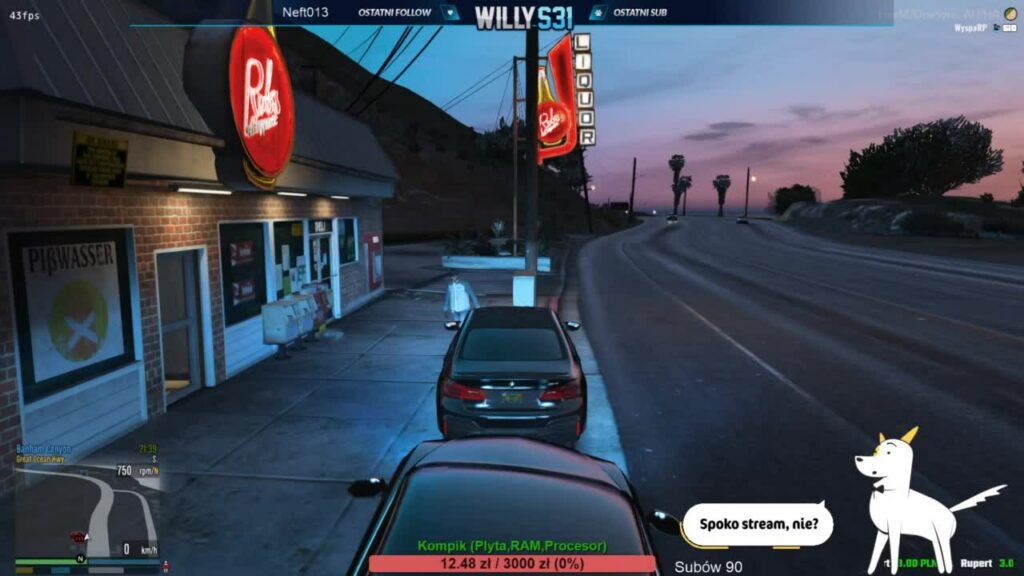 The campaign was a great success! Over 100 streamers across many genres and sizes decided to join. And they gathered 143kg of food for shelter animals in the process. It proved how much power gamers and streamers have when they come together to support a greater cause. It also showed the importance of communicating with the gaming community in their language. Again, you can check the full case study of this campaign.

Danone came to us with the challenge of introducing the mischievous Small Hunger to the streamers and Twitch viewers in order to raise Danio’s brand awareness. The applied AI-based algorithm allowed us to display Small Hunger’s message during the stream at perfect and precise moments. Small Hunger, by analysing the gameplay, knew exactly what was happening during the game. He had sharp retorts prepared for many scenarios and he attacked exactly when Fortnite characters’ energy levels dropped.

Four top polish Fortnite streamers joined in to fight with hunger attacking them in between matches and showed that they are not afraid of it. For a week streamers were facing Small Hunger at the front. The campaign was running for a week and Danio’s attempts to poke the Small Hunger inside of us have been seen over 650,000 times on live stream. If you want to know more about this campaign, check our case study!

The gaming industry is no longer a hermetic, unwelcoming place it once appeared to be. As its demographic expands, it becomes a fascinating marketing arena. Wide open to all brands who are able to find a way to communicate with gamers. Streamers make loyal and engaging ambassadors once you reach them with advantageous offers that respect the specificity of their work. Would you like to learn how to do it? inSTREAMLY is here to support you with all the tools necessary. No matter how far-fetched from the gaming your brand may seem, we can help you find your niche in the industry. Hey, if there is a place for $400 charm bracelets and $2,7200 bumbags, what’s stopping you?

Start your own marketing campaign with game streamers!

Do you want to make your brand popular among Gen Z and run marketing campaigns with high ROI? Contact us now!
Schedule a demo