A Lesson in Integrity (and Streaming) ⚖️

One way to avoid mistakes is to draw conclusions and learn from other people’s mistakes. Last week, a streaming software provider gave a free and important lesson to anyone operating in the influencer industry. Read on and find out what it was.

In other news:
📺 Kojima Productions branches out to Movies, TV and Music

🎓 The best lessons from ESI London

If you need to know one thing about Gen Z, it’s that they have very sensitive bullshit detectors built in. For young people, integrity and a fair approach are fundamental values that they hold in high regard. Violating these can turn into a PR nightmare for any company trying to play dirty – sometimes, even simply not playing consciously can be enough.

Last week Streamlabs, a commercial streaming software provider, learned this hard lesson themselves. The media storm began after the launch of Streamlabs’ new software named (at the time) ‘Streamlabs OBS’. This web-based streaming software aims to improve streaming on consoles. Just after the announcement, a rival company – Lightstream, exposed in a tweet how Streamlabs’ website is basically identical to theirs. This was a spark that started the fire. As the news broke, more companies started sharing their negative experiences with Streamlabs. One of them is OBS Studio, a well-known open-source streaming software. As they pointed out, Streamlabs used the terminology ‘OBS’ without OBS Studio’s permission. Former Streamlabs employees reported that people have been fired for speaking against the immoral practices of the company which included auto-subscribing users for Streamlabs’ premium service. Prominent figures in the streaming community also took a stand.

Streamlabs did not address the accusations about internal company practices. They have announced to start the process of removing ‘OBS’ from the software name. In response to Lightstream plagiarism accusations however, Streamlabs stated that the webpage has been a draft of the website with placeholder text.

Will renaming the software be enough? Many streaming scene insiders are quite skeptical about it. To clear its name, Streamlabs will need to show the community that they have made fundamental changes in its approach towards rival companies and employees alike. Pokimane already warned Streamlabs that if these matters will not be addressed, she will request to remove all the materials including her image from Streamlabs website. And if there’s one thing a company dealing in the influencer ecosystem cannot afford, it’s losing a face.

The company has allegedly stolen from different websites and refused to fix auto-billing issues.

OBS, Lightstream, and others have accused Streamlabs of copying their brands without consent

Pokimane, Hasan, OBS, Elgato among those who call out Streamlabs for apparent copy of Lightstream’s product

From the marketing to the actual product, Streamlabs Studio is taking hits regarding plagiarism from all sides.

Just days after Pokimane slammed Streamlabs for allegedly copying work from competitors, she announced she’s had the company remove images of her from their website—some of which she claims were used without her permission.

Kojima Productions Is Branching Out into Movies, TV, and Music

Kojima Productions, the studio headed by famous game developer Hideo Kojima, has announced that it has launched a new arm of the company focused on bringing games to other areas of pop culture, including movies, TV, and music.

‘Arcane’ Renewed For Season 2 By Netflix

Fresh off a suspenseful Season 1 cliffhanger, Riot Games’ League of Legends animated series Arcane has been renewed for Season 2 at Netflix.

Owners of the remasters will get the originals for free

Quotes, lessons, and themes from the five panel tracks during ESI London 2021.

How to watch the World Series of Warzone

Call of Duty: Warzone’s biggest stars are aligning for a massive tournament to decide who’s the best in Verdansk. 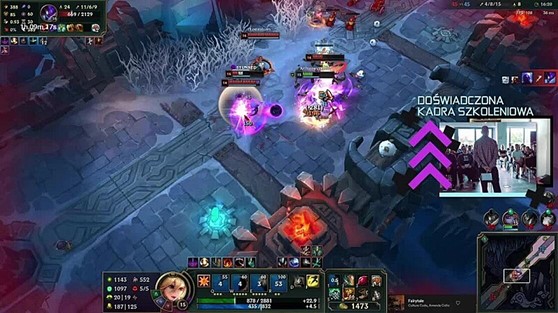 How to get a super high click-through rate? Our experience working with streamers and their audience makes us extremely aware of how huge their potential is. Often they just need encouragement, to get them interested in the topic and adjust the campaign to their needs. Despite this, they often surprise us with their high commitment. And it was no different in the campaign for the College of Physical Education and Tourism which together with Devils.One created a dedicated field of study for gamers.

Check out our case study and discover how we managed to get a super high click-through rate with our campaign!