Twitch is heaven for all kinds of streamers and gamers. You can create content, meet new friends, build a community, or just have fun. However, creators take issue with Twitch over their strict content policy, especially for how they inform you about being banned.

There are many reasons behind each ban or suspension, often leaving you wondering why it happened. So how can you avoid getting banned on Twitch? What behaviours should you avoid? Let’s find out!

Table of contents:
Be mindful of the music you play
Don’t stream inappropriate content
Don’t hate the players, hate the game
Make profits without breaking rules

Be mindful of the music you play

The music case is a tricky one. First, remember that Twitch is a US company that falls under the DMCA (Digital Millennium Copyright Act – part of the copyright law in the USA that governs content on the internet). To cut a long story short, you can’t play any music if you don’t have a license.

You can get banned from Twitch even if you encounter a snippet randomly while scrolling through the Internet. Twitch’s terms of service states that copyrighted content includes the following:

Remember that paid services like Spotify permit personal use rather than public broadcasting.

Ok, but what can happen if I stream a video game that has licensed music in it?

This is the tricky part I was talking about before. Tbh, each case is slightly different. In a perfect world, all streamers should check the legal status of the game’ soundtrack in advance. 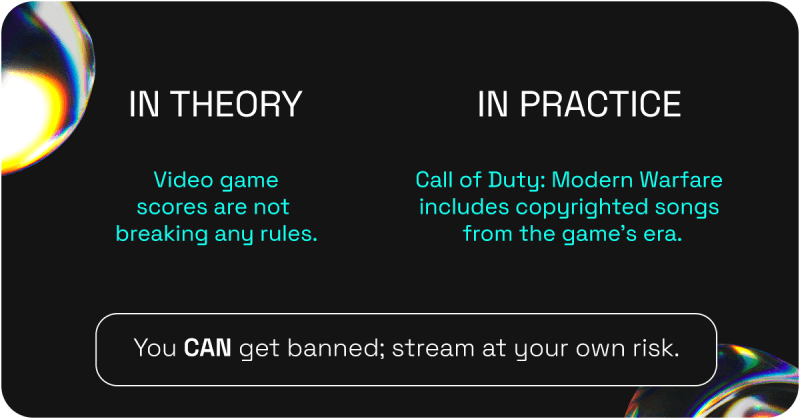 Also, be careful of games with in-game radio (Grand Theft Auto) and those containing cut scenes. In most cases, game developers have a license to use it, but they cannot pass that license on to streamers.

And how can I stream games like Just Dance or Guitar Hero?

That’s the neat part – you don’t. Stick to games with their own music. Beat Saber has a few Content ID-free music packs. Some say you can get a ban-free pass if you delete all VOD and ask not to make clips. Streamers do it, but there might come a day when your channel gets suspended.

I probably don’t have to tell you not to stream anything containing: 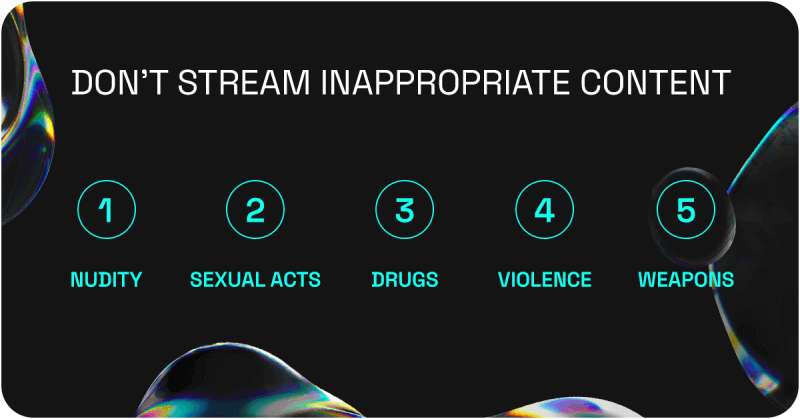 It’s super easy to get banned for stuff like this. Even going to the main page of YouTube can get you banned if there is an inappropriate image on the thumbnail. Good news – these suspensions rarely last.

Twitch streamers such as Amouranth have been banned countless times for inappropriate content, but these suspensions have never exceeded a three-day ban.

I can’t stream it, but can I discuss it with my viewers?

What’s interesting is that even chatting about those subjects is seen as promoting them. Weed is probably safe, though, as it’s legal (or decriminalised) in more than half of the US.

The platform punishes users for expressions of discrimination and intolerance. Hate speech is defined by words and conversations that bear the premises of hate. Twitch hate speech bans are based on the following:

The suspension time depends on the number of strikes you’ve already amassed and the severity of the behaviour. You can get an indefinite Twitch ban even on your first strike.

Are there any particular words I cannot use?

It’s not a problem to curse on your stream occasionally. But be careful of overusing words like simp, incel, or virgin, especially if your comments may insult others.

Make profit without breaking the rules

The platform allows you to use many features for free, and some channels try to profit from it. For example, it’s unacceptable to sell the chat moderator function to your viewers, pay another channel owner (or accept money from them) to raid channels, host someone, or gift subscriptions.

On September 2022, Twitch announced a partial gambling ban, targeting slots, roulette and dice games. In addition, it bars videos of gambling sites not licensed in the US or “other jurisdictions that provide sufficient consumer protection”.

So can I earn money on Twitch without a Partner/Affiliate status? 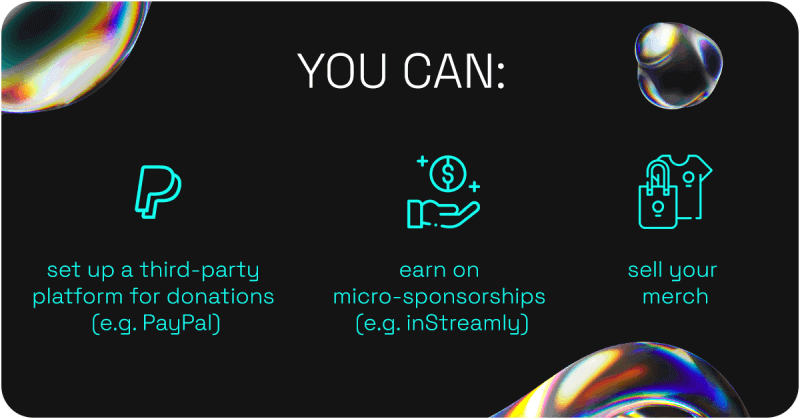 Check out how to make money streaming on Twitch to learn more!

And the last thing. Does Twitch ban for viewbotting?

For those of you who are not familiar with the term –  viewbotting, is the act of purchasing or creating bots to increase the number of viewers. It’s against Twitch’s rules and punished with bans. In some cases, other streamers buy bots to get their competitors banned. So yes, viewbotting is not only actively pursued by Twitch (and YouTube Gaming), but multiple big creators were also succesfuly sued for this practice.

If you don’t scam, follow the law, and abide by the Twitch terms of service, you can be almost sure your account is safe from a ban. However, sometimes Twitch can issue an accidental ban. Remember that you can always put in motion a ban appeal process and review your case.